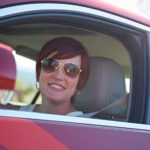 by Becky Antioco – HER Certified Contributor

I’ve never been, nor will I ever be, mistaken for a Kardashian. Or a member of the royal family. And certainly not a rap star, or even a Spice Girl. But for a few days in Sonoma, behind the wheel of a Bentley or two, I felt like it was a lifestyle I could get used to.

I was met at the San Francisco airport with the keys to a Flying Spur V8 S. And as I slipped behind the wheel, into the supple, hand-stitched leather seats, Solage, An Auberge Resort in Calistoga programmed into the GPS, any trepidation I had at driving a $200k vehicle quickly fell away. 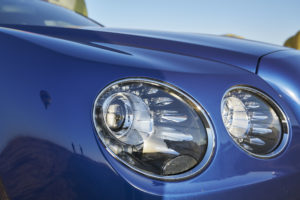 This was to be an exercise in indulgence, driving vehicles for which the word “luxury” seems somehow inadequate. According to Wolfgang Durheimer, CEO of Volkswagen Group-owned Bentley and Bugatti, the average Bentley owner has eight vehicles, owns a business, flies first class to stay in the best rooms at five-star hotels, and watches sporting events from a private luxury box. A Bugatti owner, with 64 vehicles in the garage, and a personal jet and/or helicopter parked at the airport may scoff at the lowly Bentley owner, but you can color me impressed.

Besides, while it might seem odd, perhaps a little audacious, to call an ultra-luxury vehicle such as this “practical,” I daresay that one of the reasons Bentley is among the eight parked in a celebrity garage is that it is a supremely driveable car. Bugatti, Ferrari, Lamborghini — all boast impressive credentials and horsepower, but Bentley is where it’s at for an everyday mode of transport if you’ve got the funds.

Driving to Solage, the Flying Spur, with the new “S” variant on the powerful V-8, handling was effortless, and speed limits could be decimated with alarming ease. And while the fleet of Bentleys looked right at home parked in front of the beautiful five-star resort, my Flying Spur was a little conspicuous in the Safeway parking lot where I stopped briefly for provisions. 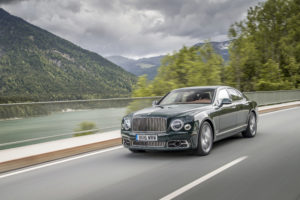 I also had the opportunity to drive the Mulsanne, Bentley’s flagship vehicle, the ultimate in handcrafted luxury and exceptional performance. I took in the sunrise from the driver’s seat, en route to a hot-air balloon flight where Mulsanne was definitely the most impressive chase vehicle on the road. It struck a visage almost as impressive as the Sonoma countryside.

The factors that set luxury cars apart from the pack – build quality, high-grade materials, a full complement of amenities — are amplified in the Bentley line up. I could wax poetic for pages about the exquisite features, but will, instead leave you with a few impressive facts about the Mulsanne and Flying Spur.

If you’ve got a few hundred grand to spend on a car, you’ll be in good company with owners as diverse as the Queen of England, NBA ballers, reality stars, musicians, and superstar actors. Or you could just sell your house to live in the Mulsanne. If I ever found myself the recipient of a windfall, I’d choose Bentley for its unrivaled comfort paired with impeccable ride quality and, especially in the Flying Spur, spirited performance.