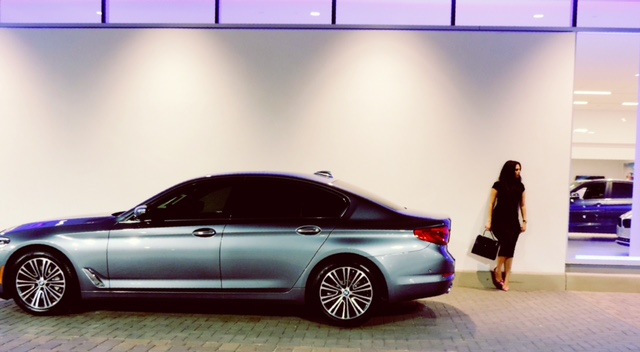 What does the number 5 mean to you? For women, it may mean Saks 5th Avenue, a worldwide fashionista hub. For a man, it could simply represent the max RPM on the speedometer. Yet, for a car enthusiast, surely the number 5 immediately flashes to the BMW 5 series. Not surprisingly, this gem leaves those other cars appearing as specs in the rear-view mirror. 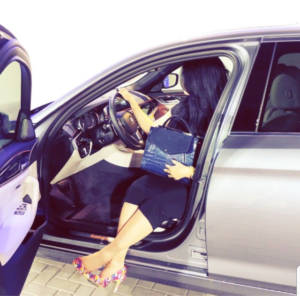 My feet ache from my stilettos as I stand in the valet of the Marriot waiting for my ride. As it pulls into the front entrance all heads turn towards the beautiful halo headlights that twinkle.  Slipping into the 530i gives off the aroma of fresh leather and elegance; that same feeling you get when walking into Louis Vuitton. The contrast of the colored walls, spotlight on handbags and smooth leather that make up this luxury place, very closely resembles the interior of the 5 series in a very indirect manner. Settling into this German work of art on a Friday evening, it’s difficult to oversee the dim orange LEDs that smoothly line the dashboard and door handles, the color contrast of the interior, as well as the studded texture of the leather, and not compare it to the high-end boutiques on 5th Avenue.

Caution, destinations may be closer than they appear.

That’s a good thing when you need to arrive at the mall an hour before closing time. Now for your typical BMW enthusiast, we may be disappointed with the downgrade from the traditional straight 6 engines to an inline 4. However, don’t let the 2.0-liter 4-cylinder engine fool you. BMW never fails with its “less for more” technology.  According to Car and Driver, the base model 5 series equipped with the inline 6 back in 2011 is slower from 0-60mph and less horsepower than the new 4-cylinder resting under the hood of the 530i. Why? The breakthrough of the single turbo with twin scroll architecture has resulted in a smaller engine displacement yet quicker, more efficient vehicle with very minimal turbo lag. With a 6 second 0-60 timing, 248 horsepower and priced at approximately $58,000, maintaining luxury and efficiency is a breeze. In a lady’s terms, that’s equivalent to a single skin care cream that can reverse aging, minimize pores, and increase elasticity in one bottle! 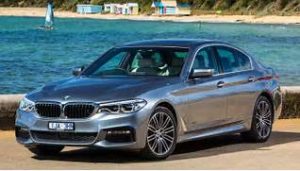 From a lady’s point of view, fashion not only comes as a clothing accessory, but cars play a huge role in the industry. Walking in your floral heels and black cocktail dress could be intimidating to anyone, but walking into a BMW in such attire is on another level. So, is it safe to assume that the 530i can maintain its reputation as a luxury sports car? Absolutely!

The automotive industry has shaped my future from day one, and that’s why a few years ago I graduated from Arizona State University as a Mechanical Engineer with a focus in automotive. Born as a daughter of immigrants who came to the United States from the Middle East I was raised to fluently speak both English and Arabic. My passion, goals and future is the automotive industry.  Yet being a girl, fashion still has a place in my heart, and although cars and fashion are an expensive hobby, its a price I am willing to pay!”