ESCAPE THE ROOM… EMBRACE THE GENESIS

In order to celebrate summer birthdays this year, my girlfriends and I signed up for the 1980’s-themed Escape the Room. Although the majority of us were born in the 80s, we barely made it out in the 60 minutes allotted. Something we did not want to escape during out ladies’ Saturday was the 2017 Hyundai Genesis G-90.

Since I’ve never experienced an Escape the Room, I was just as bewildered when I entered the room as I was when I opened the door to the Genesis – who knew Hyundai could be so luxurious with its large grille and sleek exterior lines? I was unaware that this parent company (Hyundai)had branched off to create a new brand* ( Genesis). Similar to how oblivious I was looking for clues in the 80’s room. 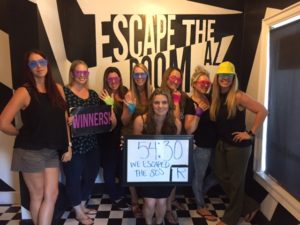 I was shocked at how ill-prepared we were, especially since we blasted ’80s on 8 on the SIRIUS XM radio through the 17-speaker Lexicon audio and Quantum Logic Surround System on our way to the venue. Ninety-nine red balloons and 867-5309 had to mean something, and we definitely attempted to open all locks using these numbers with little success. One winning number resulting from this ladies’ day (definitely not the ages we were celebrating) was the $70,000 price tag of the 2017 Genesis –  over $10,000 less than major competitors. 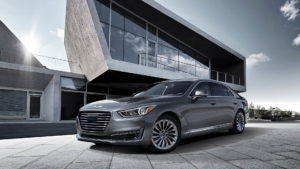 The performance of some of my experienced Escape the Room friends was impressive. They were turning through book pages, googling popular trends in the 80s and riding on outdated exercise bikes. It was quite the scene; however, it didn’t outdo the performance of the Genesis. The 3.3L 6-cylinder turbo engine with 365 hp and 376 lb-ft of torque would have gotten us out of this room in seconds. We experienced the quiet, smooth ride of the Genesis on our way to brunch and it felt like we were floating – that feeling could have also been our boasting after the ladies working there told us only 20% of groups successfully escape the room.

The 80’s room was filled with games – an air hockey table, foosball table, old Nintendo and a raggedy Suns’ jersey. The old television projecting the ancient video game was nothing in comparison to the 12.3-inch touchscreen in the Genesis. In fact, the Genesis plays no games when it comes to its safety features. Receiving IIHS’ highest honor of Safety Pick for 2017, this 4-door sedan with AWD earned the highest rating of Superior for front crash prevention due to the braking system feature. Other safety features include: standard automatic emergency braking, braking and pedestrian detection alert, blind spot protection, 9 airbags and a pre-active seatbelt system. Being locked in a room with posters of Ghostbusters and Michael Jackson for almost an hour made me crave the safety of the Genesis. 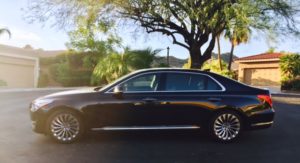 I wish the outdated couch in the Escape the Room was as comfortable as the seats in the Genesis. The 80’s exercise bike seat wasn’t even a close second in comfort. My girlfriends raved about the lavish rear seat and got a kick out of using the fold-down armrest that had complete control over the multimedia system. With multiple cup holders and USB ports along with heated and cooled front and back seats, I am surprised we ever left the comfort of our sedan. Getting 17 city mpg and 24 highway, we got to our Escape the Room and Postinos for brunch with little fuel wasted – unlike the massive amount of time we wasted trying to figure out the significance of Pepsi Twist (ummmm, we actually had to twist the top of the can to find the clue inside). I’m telling you….it is no easy feat to Escape the Room.

After finishing our celebration of turning yet another year older, it was great to unite with treasured friends, locked in a room, trying to escape the 80s yet again. Our final clue was to find something with 2 Rs and 2 Ds – my first instinct was to race out to the 2017 Genesis G-90 for the reliability, relaxation, drive, and durability, but I could not get out of the room, so I quickly grabbed the stuffed R2D2 doll and threw it to my girlfriends who got us out with nearly 5 minutes to spare. Best 55 minutes of my 37th year of life (except for the time I got to drive my dear friends in the Genesis).

*Genesis is to Hyundai like Lexus is to Toyota and Infiniti is to Nissan.  A luxury brand of the same Manufacturer.