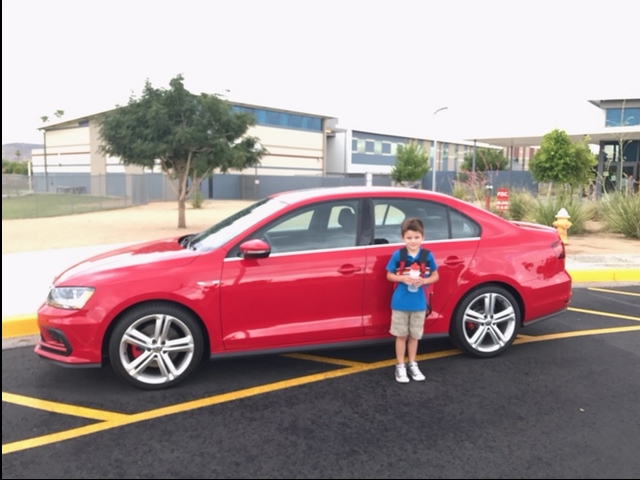 With summer winding down, my boys and I are trying to check off as much as we can from our summer adventure list before school begins. Luckily, we had the 2017 Jetta to get around town this week, and we fully took advantage of it. 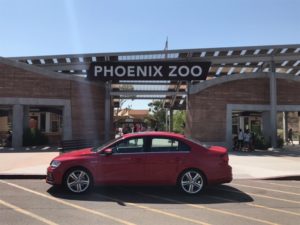 First stop, the Phoenix Zoo. Since we don’t live that close to the zoo, it was great that the Jetta gets an average of 27 mpg. With all the spots we aimed to hit this week, we were lucky to have a sedan with great gas mileage. My 6-year-old son insisted I show the map on the Discover Media 6.3” Touchscreen Navigation so he could let me know every time I took a right or left turn. He also made sure to notify me when he spotted anything in the rearview camera and would yell if he heard the alert as I got too close to another car. He is very helpful.

Berrett was even willing to help his 10-month-old brother Spencer into the snow at the zoo. That’s correct – it was Winter in July. Driving the Jetta up to the zoo, I tried to imagine winter weather as it was 100 degrees outside; I imagine in winter weather, the front fog lights, 18” alloy wheels with all-season tires, heated/foldable/power adjustable side mirrors, rain sensing front wipers with heated washer nozzles and heated power driver’s seat in the Jetta would be useful. All great features that Spencer would have appreciated as he cried while his toes just barely touched the fake snow.

I really couldn’t get out of there fast enough. Crowded, incredibly hot, melting snow – we put the 2.0L TSI DOHC Turbo 4-cylinder direct injection engine with four wheel independent sport suspension to the test. Berrett called the Jetta a race car all week – not only because of how quick it was but the tornado red exterior, titan black leatherette interior, GLI grille and exterior trim, the chrome –tipped exhaust and the alloy pedals and GLI metal door sill scuff plates. He continuously asked me to us the 6-speed manual transmission to go faster and would say, “Spencer, hold on!” 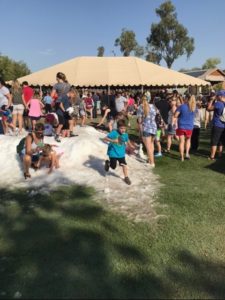 Next on our list was the indoor playground, Whipples. Talk about moving fast – Berrett would not slow down: laser tag, jungle gym, trampolines and the infamous bumper cars. Just like I imagine if he were driving the Jetta, Berrett drove that bumper car fearlessly and fast. At least the Jetta has an overall vehicle safety score of 5 stars with an intelligent crash response system – this was definitely lacking in the bumper car, so I was glad to get out of there too.

Taking it down a notch, we headed to the public library. In order for the boys to relax in the 2017 Jetta 2.0T GLI, we opened the power tilting and sliding sunroof and Berrett used the armrest between the split-folding rear seat with pass through. I played some classical music from Sirius XM on the Fender premium audio system. Before long, both boys were asleep, so by the time I used the park distance control (Park Pilot) to get a front-row spot at the library, they were completely subdued. The Jetta got them right where I want them.

Finally, it was time for Berrett to start to fly into the First Grade – his two-week camp at the end of the summer to prepare him for his first-grade year.  It is hard to believe I have a first grader – almost as hard to believe that the 2017 Jetta 2.0T GLI has an MSRP of $27,895.  After all, this “race car” helped us complete some of our priceless summer adventures.