When you have numerous grandchildren (9 to be exact) and they live fairly close, you get to experience some fun stuff.  I try and take at least one or two of my grandkids in all my test vehicles to see how they like it including legroom, safety seat ease, cargo area, sound system and child safety latches.   They also have become very opinionated about the leather or lack of, colors and even the exhaust tones on some vehicles.

This last test vehicle I drove (Mazda CX-5 Grand Touring) I was told that Sofia and Gabby needed to bring their American Girl dolls with them and that they were to experience the ride as well.  I listened as we traveled to a soccer game and heard them asking their dolls Samantha and Kit questions like “how do you like the space back here?” and “Oh! Look at the leather seats, they are white, don’t kick the back of grandma’s seat or she gets angry.” The best was when one of the “dolls” asked me how many speakers were in this thing?  When I told them about some of the Technology highlights and that Zoom Zoom was the mantra for Mazda, there was no response until I got to the 10-speaker surround sound system and then they asked me to blast it and drive fast. 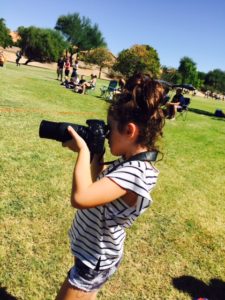 Another surprise developed that day when Sofia whipped out a 35 MM camera that her dad let her borrow.  He is a professional photographer and gave her some lessons and his old camera to learn with.  I was fascinated with this 7-year olds ability to focus in on detail on the soccer field as well as the smiles on people’s faces.  I had her take a few photos of the Mazda CX-5 but she said she would rather ride in it than photograph it and asked I not use any of her photographs without written permission.  What?

The Mazda CX-5 is a compact crossover SUV with a 2.5-liter four-cylinder SKYACTIV-G Engine.

It was a really nice day, and I did let the girls sleep over with their American Girl Dolls tucked under their blankets… I kissed them goodnight (the dolls too) and I asked them what they remembered from the day in the car and all that I explained to them.  The response was Zoom Zoom and we need to sign a talent release.