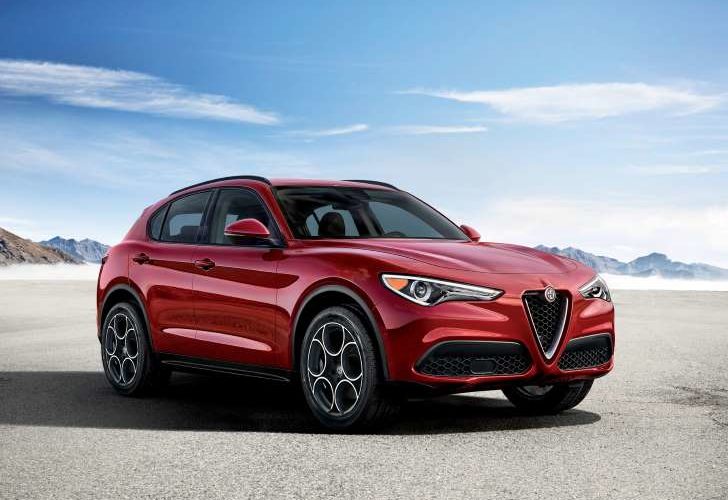 After test driving the Alfa Romeo 4C in 2016 (see my review at https://www.hercertified.com/category/car-reviews/alfa-romeo/) and occasionally hanging out at the local Alfa Romeo dealership in Scottsdale, Arizona,  I couldn’t wait to test drive the 2018 Alfa Romeo Stelvio Crossover.  Alfa Romeo is known for its performance cars, such as the 8C Competizone that comes with a price tag of over a quarter of a million dollars.   I sometimes wonder if it’s the cars I like or the Italian sounding names that makes me want to take a trip to Milan, Rome, Venice or Tuscany. 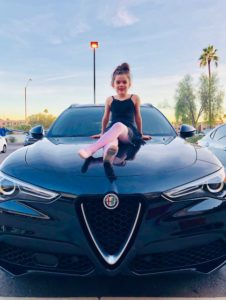 Alfa Romeo, out of the North American market for over 13 years, is now testing the waters with two models; initially the sports sedan Giulia and now the crossover Stelvio.  Both models appear to be more affordable than the 4C or the 8C so that sedan and crossover shoppers can say they drive an Alfa Romeo to raise some eyebrows. 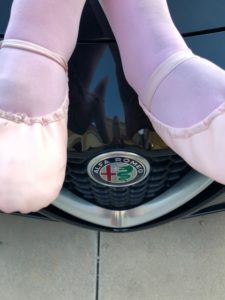 For this review I decided to take my granddaughter Sofia Serafine with me to her ballet lesson.  Here we have a little girl named after Sofia Loren the Italian actress (just spelled differently). She is a descendent of her great grandfather Serafine, who came over from Italy to the United States around 1920. I thought it appropriate to take my little Italian granddaughter to ballet in this Italian car since the Italian Ballet has almost as much history as Alfa Romeo.  The Cecchitti method, which instructs ballet dancers the five positions of how to hold their heads, is a widely recognized pose and held in high acclaim in the world of ballet.  Since she is a beginner, I don’t think Sofia is ready for the Cecchetti method, but she sure was ready for the test ride, holding her head high, as she sat in the Stelvio.

I’ve test driven many crossovers in my career but there was something special about the Stelvio.  I’m not sure if it was the badge with its Red Cross representing Milan or the snake representing the ability to change and renew itself. After 13 years of no presence in North America I would say that applies.

The interior of the Stelvio didn’t jump out at me like the interior of the Mercedes Benz E 400 I test drove last week, but it certainly kept my interest with a very handsome appearance.  It had the paddles you would see in the Giulia Quadrifoglio, which are nice compared to some of the plastic looking ones I see in other vehicles. As far as the sound system is concerned, the Italians might want to stick to Pizza and the Leaning Tower of Pisa and leave the sound systems to the Germans. 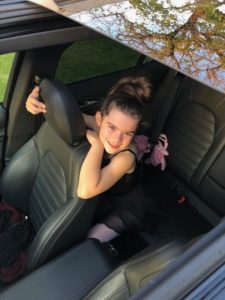 The Stelvio handles well and Sofia and I loved the Dual Pane sunroof.  Sofia wanted to know what the difference was between a sun roof and a moon roof.  When she asked that I thought of Moonstruck the movie and how Cher slapped Nicholas Cage stating, “Snap out of it. “  I told her the difference is that a sunroof generally has any kind of panel on the roof that permits light, air or both to come into a vehicle.  A moonroof is considered a type of sunroof, but the main difference is that a moonroof usually has a tinted glass panel, much like an extra window on top of the car. She looked at me with confusion and wanted to know more about Italy and Alfa Romeo.

With regard to all things Italian, we can go on forever but for me I’m concentrating on the Alfa Romeo Stelvia and how it brings a European flair, performance and  eye candy looks to the usual boring American Crossover.  So besides Sylvester Stallone, macaroni and my granddaughter I love Italy’s  Alfa Romeos. Bellissimo!

For more on the Alfa Romeo Stelvio Ti Sport AWD go to www.AlfaRomeoUSA.com