We recently celebrated 4th of July poolside followed by watching fireworks from the driveway through the power tilt/slide moonroof in the 2018 Barcelona Red Toyota Corolla XSE. The neighborhood paid $15,000 to keep the annual fireworks show – if they are willing to donate $25,881 which isn’t that much more, I can purchase the Corolla and put on a firework show all year long as I drive through the neighborhood with multi-LED headlights with accent lights, LED daytime running lights in the bumper, color-keyed heated power outside mirrors and a rear spoiler. With all of these explosive exterior features combined with the fiery red paint color, the Corolla would basically be a constant sparkler.

The interior of the 2018 Toyota Corolla XSE is just as sizzling. The SofTex-trimmed seats which can be heated in the front (not necessary for July in Phoenix) offer comfort and luxury. They kept us cool and are also stain resistant so the drips from my son’s red, white and blue popsicle easily wiped off.  The spacious cargo area and 60/40 split rear seats made it easy to pack the cooler, glow sticks, fruit salad and pool gear. However, the biggest jewel in the Corolla is the Entune premium Audio with Integrated Navigation and App Suite. This provides features like a 7-inch high resolution touchscreen with split screen display, 8 speakers, iPod connectivity and control, music streaming, Siri eyes free and Sirius XM – we were blasting God Bless America and Party in the U.S.A. while the fireworks struggled to complete with the intensity of Entune.

It is not only about the shimmer and glow the Corolla has to offer – just like 4th of July fireworks, this Toyota has power. The Valvematic engine technology makes the ride efficient with an average of 31 miles per gallon but the CVTi-S transmission makes it smooth, and the driver can be in control especially when using the paddle shifters and putting the XSE in sport mode.  Feeling safe is important too, so with 8 airbags, the Star Safety System, backup camera and all the features in the standard Toyota Safety Sense, this Corolla has it all. Let’s just say I felt much safer sitting in the Corolla than outside with the toddlers running around with sparklers.

Fourth of July is always a great time to celebrate the country we love with friends and family. The traditional fireworks are fun to watch and listen to, but the 2018 Toyota Corolla XSE stole the show this year. Maybe I will have my kids set up a lemonade stand in the neighborhood to see if we can raise enough money to buy the Corolla; after all, the 2018 Toyota Corolla received the NHTSA 5-star overall safety rating. That is much safer to have around the neighborhood than explosives. 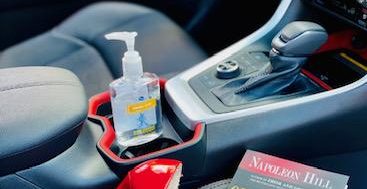